Psoriasis is a common chronic skin condition that causes raised, red, scaly patches to appear on the skin and occurs in approximately 2 to 2.6% of the US population. Psoriasis speeds up the life cycle of skin cells. It causes cells to build up rapidly on the surface of the skin.

Psoriasis can occur in different forms, each with its own symptoms. Although psoriasis is often considered as only a skin condition, it can also cause psoriatic arthritis.

Conventional medical treatment can be useful, but it does not always help or only gives a temporary result because it does not treat the cause of the disease. There are also many natural treatments to control psoriasis, and psoriasis diet is at the top of the list.

Why is psoriasis diet so important? Studies have shown that patients with psoriasis often have a weakened intestinal barrier, or a leaking bowel syndrome.

Therefore, the right diet for psoriasis can be very important. As the slogan of the National Psoriasis Foundation of America says, “Proper nutrition ensures a happy life.” I totally agree with them!

Psoriasis patches can range from a few spots of dandruff-like scaling to major eruptions that cover large areas.

The rash that occurs as a result of psoriasis is most common on the:

But it can also occur elsewhere, such as finger and toenails, genitals, and mucous membranes of the mouth.

Skin cells build up in thick, scaly patches on the skin’s surface, continuing until treatment stops the cycle.

Just what causes T cells to malfunction in people with psoriasis isn’t entirely clear. Researchers believe both genetics and environmental factors play a role and many physicians have identified a number of psoriasis aggravating factors which include. Psoriasis typically starts or worsens because of a trigger that you may be able to identify and avoid.

Factors That May Trigger Psoriasis Include: 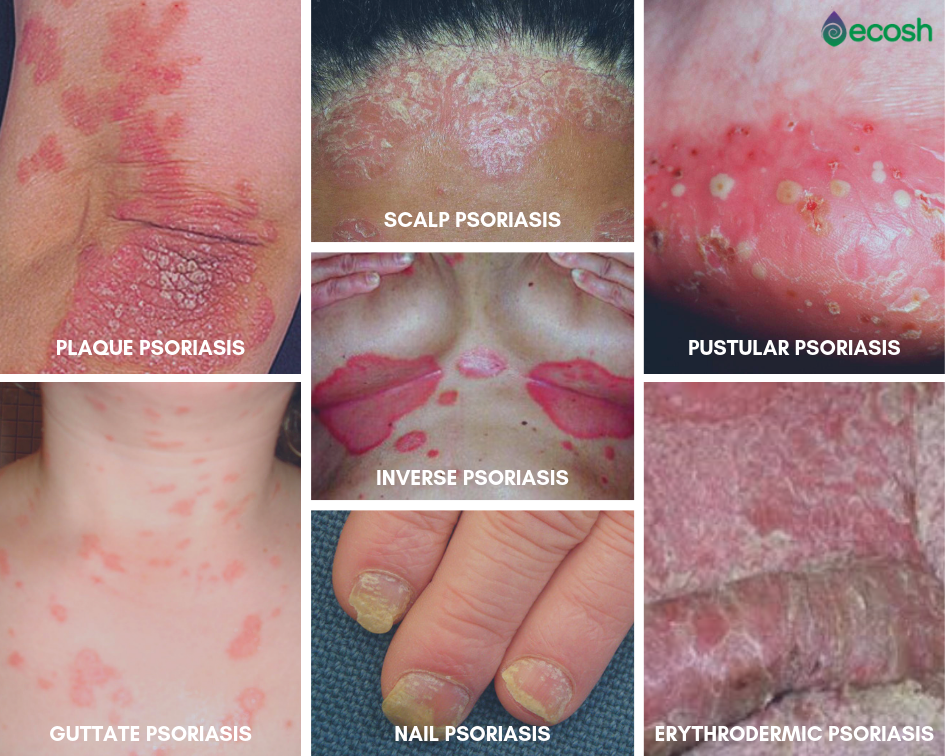 There are several types of psoriasis. These include:

In conventional medicine, the physician will take into account the severity of the case, the psoriasis type and the size of the psoriasis when prescribing. If one method of treatment is not effective enough, gives side effects or does not work at all, it is often exchanged against another.

All these medicines should be used only under a doctor’s supervision and only limited amounts to avoid side effects as they might be seriously worrying.

Side Effects of Some Psoriasis Medication:

Those treatments are rubbed directly into the affected skin to bring local relief without the system-wide side effects of medicines taken by mouth or a shot. Topical treatments for psoriasis include: